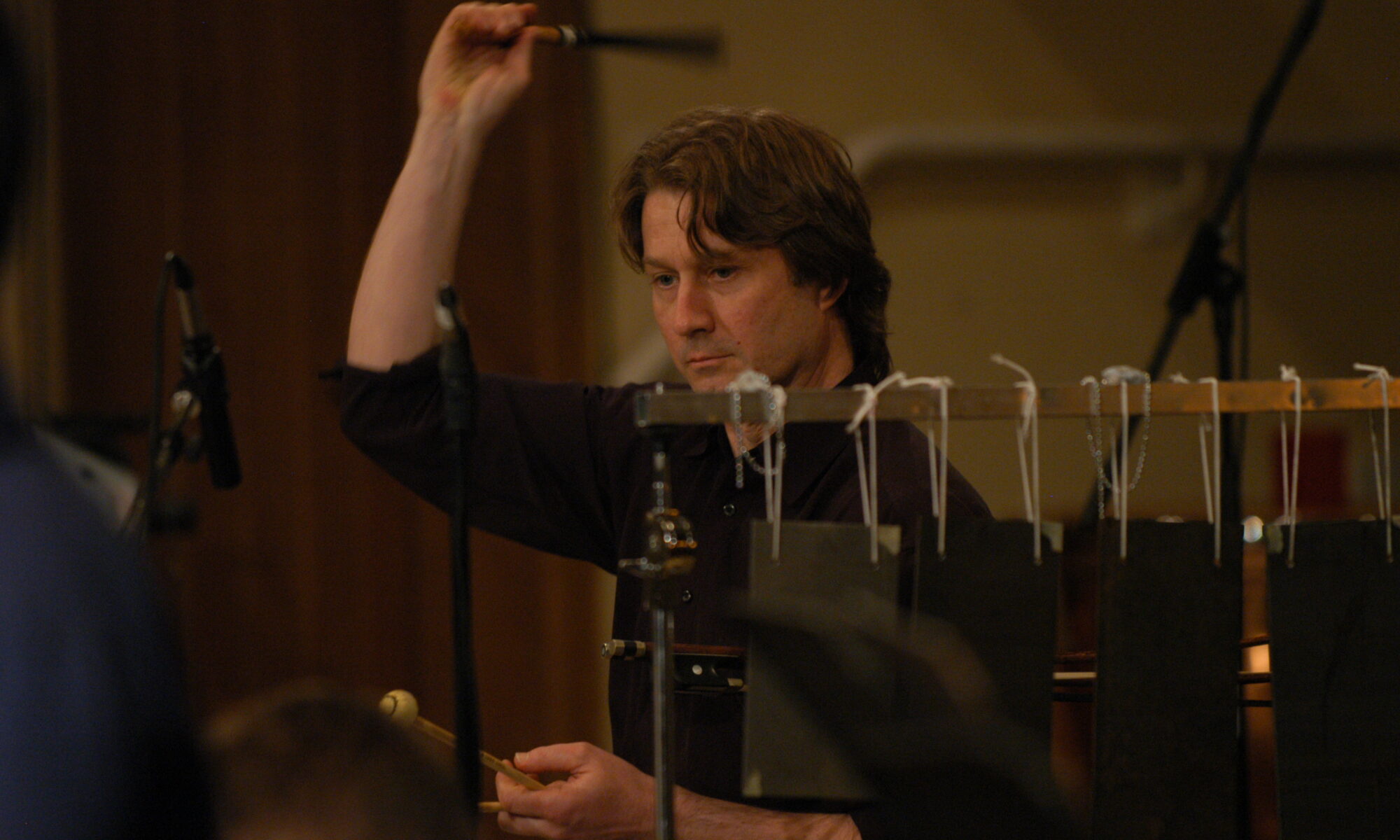 Long-term collaborations between composers and performers strike rarely in contemporary music, but when they do they resonate strongly. Those between Karlheinz Stockhausen and Kathinka Pasveer, Luciano Berio and Cathy Berberian, and John Cage and Merce Cunningham, for example, nurtured some of the great compositions of the twentieth century. Those three were all romantic as well as professional relationships, but the association between the British composer Richard Barrett and the Australian new music ensemble ELISION that began in the late 1980s has been equally important for late twentieth and early twenty-first-century music. It is a relationship that began with the composition of the trio Another heavenly day (1989–90) for E-flat clarinet, electric guitar, double bass and electronics, and colloid (1988–91) for the 10-string guitar of ELISION’s guitarist-director Daryl Buckley. The creative sympathies these two short works revealed between a composer still early in his career and an ensemble formed only two years previously inspired a dramatic increase in activity. The five-part cycle of overlapping compositions, negatives (1988–93) for nine amplified musicians, that followed became the first in a series of ever-expanding cycles that defines this unique creative partnership, from Opening of the Mouth (1992–7) and DARK MATTER (1990–2002), to the two-hour CONSTRUCTION (2003–11) and the current work-in-progress PSYCHE (2017–).

Along with Buckley, percussionist Peter Neville is the only other of ELISION’s founder members still performing with the group. As such, he has played Barrett’s music for more than thirty years, beginning with the remarkable duo for trombone and percussion, EARTH (1987–8) – an experience that, in a video call I had with him and Barrett at the start of 2021, he describes as ‘a huge musical leap forward for me’. Since then, he has been involved in the first performances of numerous works as well as a long and ongoing series of improvisations. Several pieces have been written especially for him. The three captured in this film – delta (1990–93), abglanzbeladen/auseinandergeschrieben (1992–6) and entoptic (2017–18) – are drawn from negatives, Opening of the Mouth and PSYCHE, respectively. They therefore represent way-stations in a creative partnership between composer and performer that is one of the most enduring in today’s music.

‘One of the many advantages of the continuity of Peter and I having worked together for such a long time’, says Barrett over Zoom, ‘is that if I’m going to write something new for him it has to be something new. I don’t want to give him something he has done before. Partly because that doesn’t interest me but partly because I don’t think it interests him particularly either. Everything we do has to expand the body of work that already exists in some meaningful way.’ ‘The counterpart to that’, Neville adds, ‘is that I can keep giving into a piece like abglanz for twenty-four years and still feel that I can push it even further, and that is immensely satisfying’. Both sides of this relationship are captured in Agatha Yim’s film: the creative restlessness that drives exploration and invention, and the devotion that inspires lifelong engagement with another’s work and character.

Barrett’s first work for Neville was delta, the first movement of negatives. Originally composed for ensemble, it is recorded here for the first time as a percussion solo extracted from the larger work. The composer often begins his collaborations with performers by finding out what instruments they have and what they can do with them: this curiosity lies behind the series of works he has written for Buckley’s various guitars, and for the idiosyncratic clarinet collection of Carl Rosman. The instrument Neville plays in delta is an angklung, an instrument from West Java constructed from tuned bamboo tubes suspended from a frame. Typically, members of an angklung ensemble will be responsible for just one or two pitches, playing melodies on handheld instruments in interlocking collaboration, like a Western handbell ensemble. Neville’s instrument is unusual in giving a forest of more than thirty tubes to one player. Barrett first encountered it on a visit to Neville’s practice room in the early stages of preparing negatives. Seeing it hanging and hearing it played, he had to include it. ‘There’s such an incredible richness to be had there because of the complexity of the resonances when you let go of it, a sort of orchestral depth’, he says. (The angklung used in this film is actually not Neville’s, but belongs to Buckley and the composer Liza Lim, who has also written for the instrument.)

Neville, however, had hardly played his three-octave angklung at this point. He describes percussionists as bowerbirds, instinctive collectors, and he had found the instrument advertised in the Trading Post classified ads magazine, listed as an ‘Indonesian cane rattler’. What was actually for sale was as a welcome surprise (he was expecting something much smaller), although when he showed it to Barrett he had yet to get to grips with it. ‘This is one of the challenging things about being a percussionist – the angklung is not something I had dealt with, and then you get something that follows such a virtuoso path. It was a huge learning curve.’ Taking negatives on tour meant constructing special flight cases and a bespoke stand – it was not an instrument one could expect to find in any tour venues. Playing it meant learning a range of techniques that lie outside even the traditional forms of angklung music, such as the range of tremolos and glissandi that can be seen in the film.

As befits its name, delta expands outwards in several dimensions: not only from the centre of the instrument to its extremes of register, but also into different forms of sonic expression. This expansive form characterizes Barrett’s second piece for Neville, abglanzbeladen/auseinandergeschrieben (1992–6), which begins the Opening of the Mouth cycle. Its title derives from two poems by Paul Celan, whose poetry is in many ways the subject of Opening of the Mouth; the second, ‘Engführung’, is translated by the composer in the preface to the score of abglanzbeladen/auseinandergeschrieben:

At the work’s heart is the vibraphone, but this is enlarged with an array of other instruments that extrapolate aspects of its sound in various directions: Thai gong (operated by bass drum pedal), crotales, steel pan and flexatone – the last of these, when bowed, produces the unique sound of a vibraphone pitch bend. Even the logistical theatre of Neville’s many stick changes, precisely honed over years of playing, is fascinating to watch. The adventurous approach to the instrument and its sound emerged from the ongoing creative partnership. Performer and composer worked closely on this side of the music, before Barrett further teased out the extremes within those ideas. ‘When it came to writing that piece’, he says, ‘we had the experience of working on negatives behind us. A lot of the way the instruments are used together are things that came up in conversation.’ The goal was to find as much timbral variety within the vibraphone as possible (all those stick changes … ), bringing it into a unified texture or splitting it apart into four different polyphonic voices. The first half of the work is about the convergence and divergence of different voices – a spatial configuration that is easily read on camera but carries over into the sound – while the second half stretches those divergences to the point where they pass beyond the vibraphone itself.

The third piece on the film entoptic, belongs to the most recent, still ongoing, cycle of works Barrett has written for ELISION. PSYCHE is an exploration of the origins and possibilities of the imagination, and the consistencies that can be found in human expression between different media and remote settings in time and place. In a programme note, Barrett describes the cycle as an attempt ‘to confront that interface between the inner and outer physical worlds … that is at the heart of all musical activity’. entoptic is inspired by Neolithic cave painting and the rituals that surround them: the gradual deepening of an internal journey, both into the cave and in relation to the spirit and personality of the individual.

In entoptic Neville plays a composite instrument of twenty-five found objects. Sixteen principal instruments, with flat upper surfaces, are arranged in four rows, roughly rising in pitch from left to right, with each row representing a relatively homogeneous timbre: pots, biscuit tins, small drums, brass gongs. In the gaps within this 4 × 4 grid nine more instruments are placed – woodblocks, plastic and glass bottles, a ceramic saucer, china bowls – in a close configuration such that ‘glissandi’ can be produced by sweeping the beaters (in this case, plastic knitting needles) across the whole array in any direction. This composite instrument is Neville’s own invention, a set-up he has arrived at over a number of years of improvising, often in pieces directed by and featuring Barrett on electronics. Many of its elements have been arrived at over a long period of time: the use of ceramic bowls and saucers recalls the tuned flowerpots Barrett calls for in DARK MATTER, while other components have their origins as far back as sections of Opening of the Mouth.

Sitting next to Peter and playing in improvisations alongside him, the sound of this instrument gradually got into Barrett’s head. Its compressed size made possible a maximal form of timbral variety within passages of very fast music – an extension of some of the ideas behind abglanzbeladen. It also presented an opportunity to extend the idea of spatiality, as the percussionist traces shapes across the instrument (represented as pictograms on the score – lines, zigzags and other shapes, like an ancient form of alphabet) that translate spatial movement into sound (and vice versa). In the second and third sections of entoptic this is expanded still further, using microphones at each corner of the percussion array to pick up, alter and project the sounds around the audience, making of the instrument a map of the auditorium. This connects to a wider concept in Barrett’s music: ‘If there’s a theme that goes through all of my work it’s this mysterious coordination that we have between inner and outer worlds and looking at the connections between them. That touches on the one hand the nature of the imagination, which gives rise to musical creativity; and on the other hand that the outer world encompasses not just looking at the star-filled sky and wondering what’s out there, but also the relationship of individuals to society and to one another’.

The journey inwards that is also a reaching outwards – the river delta; Celan’s writing assunder; the entopic phenomena that are seen within and only by the observer’s own eye – is itself represented in this remarkable creative partnership. ‘Playing Richard’s music has been one of the most formative things for my musical career and it has given me a great chance to grow and develop’, says Neville. ‘But the chance to work with someone that closely for so many years is a special opportunity. And to produce work of scale and substance like that, to have influence on that from the other side is extremely important … It’s just been an amazing journey over these years.’ Or, as Barrett puts it: ‘Every opening creates new openings. As time goes on there’s more and more to do.’